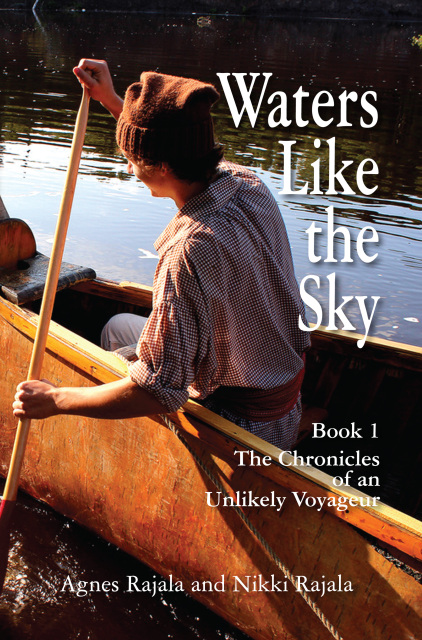 Description: Steeped in the history of the French-Canadian voyageur journeys in the early 1800s in North America, Waters Like the Sky is a story of a well-educated teen boy who despises his fancy schooling and longs for a more adventurous life. André’s fate changes when a letter with a royal seal arrives. He discovers he has French noble blood. He is part of a family in France, has a brother he’s never met, and an enemy who wants him dead. Determined to locate his brother and set things right, André sets out to search for Denis in the only way open to him—becoming a voyageur. Unaccustomed to the hard voyageur life, André uses his only advantage—his education. He fights to earn the respect of his fellow voyageurs and gains many life lessons on his quest to track down his brother. Will he be able to reach Denis before the evil one the natives call the windigo finds him first?

About the Authors: Minnesota native, writer and appreciator of early American and Canadian history, Nikki Rajala grew up watching her mother, Agnes Peloquin Rajala, create literary works based on the rich heritage of their family’s ancestors. Nikki joined her in researching the lives and history of French-Canadian voyageurs and explorers. Nikki’s first book, Some Like It Hot: The Sauna, Its Lore and Stories, published in 2000 by North Star Press of St. Cloud, Minnesota, is a reflection of her Finnish heritage and love of the family sauna. Agnes and Nikki co-authored this book, Waters Like the Sky, which pays homage to being direct descendants of French-Canadian voyageurs. After Agnes died in October of 2013, Nikki carried the legacy of Waters Like the Sky  forward, determined to share this historical adventure with readers everywhere. The end result is an action-packed, yet historically accurate, adventure. Nikki is also an avid photographer. She retired from teaching English as a second language and currently works as a copy editor. She resides in Rockville, Minnesota, with her husband, Bill Vossler,  also a freelance writer. Readers can connect with Nikki Rajala on her website: http://nikkirajala.com/.
Awards:
Biennial Book Award from Delta Kappa Gamma, an honorary organization of professional women teachers.
Add to Cart