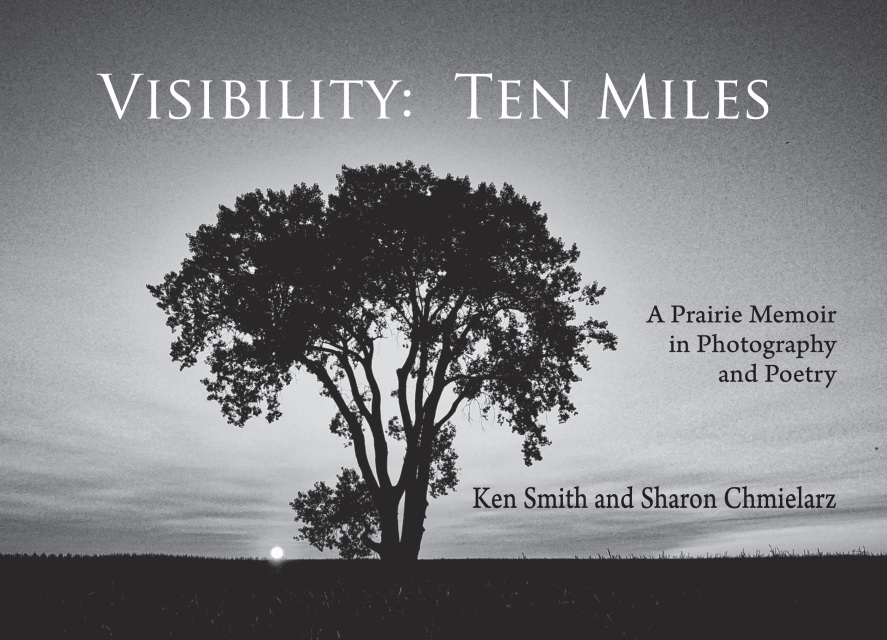 Description: Visibility: Ten Miles is a collaboration of poetry and photography between Sharon Chmielarz, poet, and Ken Smith, photographer. Both are well acquainted with the prairie; hence these photos and poems include not only grasslands but also the unusual only insiders have seen. These images come from two angles, what the eye sees and what the heart responds to. The title suggests the ability on the prairie to see in distances of miles, not of city blocks or minutes. Here it can suggest something more lies ahead which is unseen. And that is what this book brings to the reader–what might be unseen or unremembered or not yet imagined to the eye.

“In Visibility: Ten Miles, Sharon Chmielarz and Ken Smith cultivate what Bill Holm called the prairie eye—the voice of the grassland, the struggle of the trees, the complexities of Midwestern weather, and the ‘melancholy musk of roots.’”
–Debra Marquart, author of The Horizontal World: Growing Up Wild in the Middle of Nowhere

“Poet Sharon Chmielarz and photographer Ken Smith, the contributors to Visibility: Ten Miles, are much alike. They have depth of field, alternating long views and close-ups. The result is something more than a fair likeness of the prairies they see and sing.
–Tom Isern, professor of History and University Distinguished Professor, director, Center for Heritage Renewal
“In Visibility: Ten Miles, Sharon Chmielarz brings together poems that originate in the harsh landscape of her native South Dakota and the people who live there. Each poem is paired with a masterful photograph by Ken Smith. For both artists, landscape, prairie, earth and sky, are deeply embedded in memory. It’s in their bones, and the art speaks powerfully to that authority.”
–Norita Dittberner Jax, Stopping for Breath

“The poems and photographs in Visibility: Ten Miles present dramatic and intimate imagery of the life and stark beauty of the Northern Plains. Poet Sharon Chmielarz depicts the prairie landscape and its people in surprising, poignant yet unsentimental ways. This stunning collection is a journey of insight and pleasure for anyone new to this place and for those like me who return home.”
–Margaret Hasse, poet, Earth’s Appetite

About the Author: Sharon Chmielarz, born and raised in Mobridge, South Dakota, has had eight books of poetry published: Love from the Yellowstone Trail has been called “uniquely American,” “finely crafted,” “powerful,” “a joy to read.” She has been a finalist in the National Poetry Series, nominated several times for a Pushcart Prize and featured on American Life in Poetry.
About the Photographer: Ken Smith, a native of Western Colorado, lives in North Dakota, where he and his wife, Robin, raised six children. Ken holds an M.A. and D.A. in history from the University of North Dakota. After teaching in high school and college, he’s attending North Dakota State University, working toward a Ph.D. in Great Plains History.