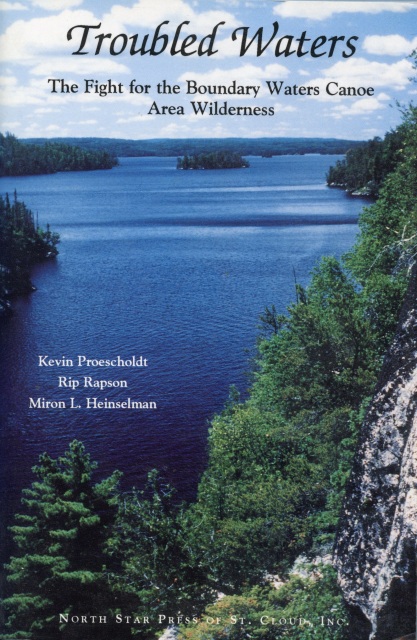 Description: The Boundary Waters Canoe Area Wilderness controversy remains today the most volatile, hotly debated Minnesota environmental issue in recent decades. In the 1970s, one crisis after another threatened the area—mining, logging, motorized use—all of which led to a major national congressional battle beginning in 1975. Today controversies continue to swirl around the BWCA Wilderness, our nation's most popular wilderness. Troubled Waters describes the turbulent and controversial conservation history of the BWCA Wilderness, focusing on the explosive struggle from 1975 to 1978 to pass the BWCA Wilderness Act in Congress.

Reviews:
"A riveting story. The characters are larger than life. The drama moves along at a dizzying pace. The authors entertain and educate at the same time. Not to be missed."
–Brock Evans, Dean of the Capitol Hill wilderness lobbyists
"An indispensable historical resource for one of the most formative national environmental struggles of recent memory. The authors are uniquely situated to capture the complexity and drama of the events that changed the course of conservation politics not just in Minnesota but across the country."
–Donald Fraser, Former United States Representative
" At last, we can understand why the business of protecting the Boundary Waters Canoe Area is never done. The authors provide a revealing look into this tempestuous history and politics . . . expertly written and worth every word."
–Michael McCloskey, Chairman of the Sierra Club
"This effort is an earnest treatment of the environmental, political and economic battles that shaped the designation and preservation of America's only canoe wilderness area. It stands as a powerful testament of past achievements and is a strong reminder to current and future generations of conservation and political leaders of the dynamic challenge facing environmental policy issues."
–Congressman Bruce Vento
Add to Cart
Proudly powered by Weebly