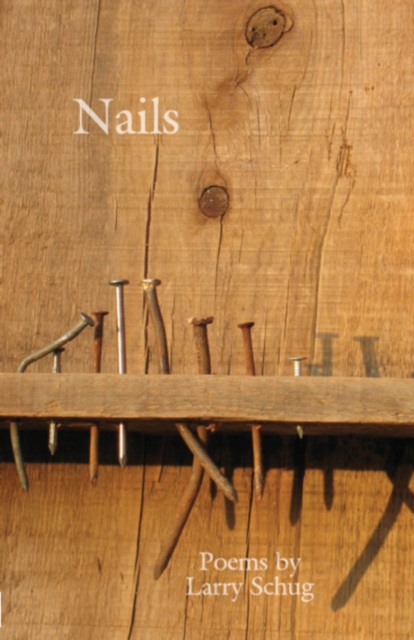 Review:
"Over the years, Larry Schug has “spit out” 111 nail poems. His most recent book, Nails, is the rusty coffee can that holds them. The nails in these poems are staunchly, relentlessly physical—2 penny, 8 penny, horseshoe, railroad spikes, straight or bent, shiny or rusty, discarded or wedded to wood. Because Larry trusts the potency of the material world, the nails remain themselves and still become much more—the bond between father and son, a little girl trying to hold her warring parents together, unemployment lines, old age, people who have been beaten down once too often, redeployed soldiers. There are hammers in these poems, too, most of them brutal and deadly, but as always in Larry's poems, love holds this shaky world together. Unsettling, funny, angry, tender—there's a surprise on every page of Nails."
–Mara Faulkner, OSB, author of Going Blind: A Memoir


About the Author:
Larry Schug has worked as a dishwasher, grave digger, bookstore clerk, grounds­keeper, junk-yard laborer, assembly-line worker, forestry technician, fire-fighter, and farm worker. He is currently employed as recycling coordinator at the College of St. Benedict in St. Joseph, Minnesota, where he has worked for thirty-one years.
Larry is the author of six books of poems--Scales Out of Balance (1990), Caution: Thin Ice (1993), The Turning of Wheels (2001), Arrogant Bones (2008), Nails (2011), and At Gloaming (2014), all published with North Star Press of St. Cloud, and a chapbook, Obsessed with Mud, published by Poetry Harbor, Duluth, Minnesota. Caution: Thin Ice was a 1993 Minnesota Book Award Finalist and Arrogant Bones was a 2008 Midwest Book Award Finalist. He has won two Central Minnesota Arts Board grants, a 2007 Pushcart Prize nomination and was awarded a 2008 McKnight Fellowship for Writers. He has also received recognition for poems in The Talking Stick and Prairie Poetry.
Larry lives beside a large tamarack bog with his wife, Juliann Rule, their dog, Mojo, and cats, Darwin and Wendel, in St. Wendel Township, Minnesota.
Add to Cart