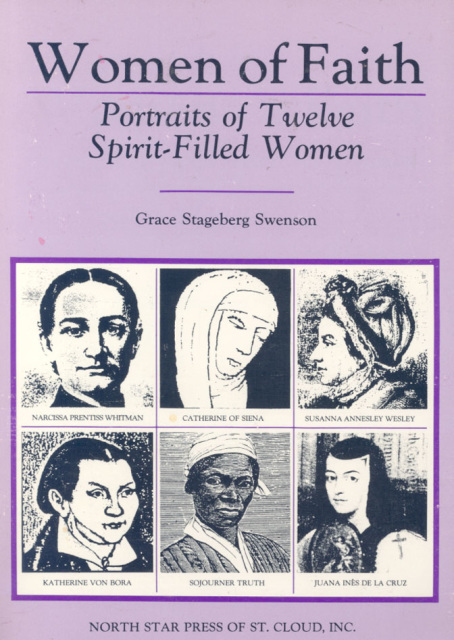 Description:
Women of Faith explores the lives of twelve women of diverse historical periods, religions, ethnic origins, and nationalities.
It examines their motivations and commitments, their differences and similarities. Each in her own heroic way overcame the stigma placed on her by society, culture, and religion.

Reviews:
"Each chapter is a fascinating study of the development of a strong and courageous woman. These women live as singular and unique, yet a common profile emerges as well. Each learned to listen to and act on an inner truth that called her to a personal expression of faith beyond the conventions of ordinary religion. The essence of the rich personalities revealed is found in the heart of their various spiritual convictions and in the zest for life with which their faith energized them. Women of Faith is a valuable contribution to the literature of women's spirituality, development, psychology, and history.
I'm touched by a sense of companionship with these women—as if they are fine traveling companions for the spiritual journey. Many of them were already friends, and it was good to come to know them better. Others are new to me, and I feel as if I've made a precious discovery in coming to know them a little."
– Jana Preble. International teacher and consultant in Spiritual Development and a professor of Applied Psychology and Women's Studies at St. Cloud State University, St. Cloud, Minnesota

"Women of Faith effectively portrays the lives and struggles of twelve heroic women. They range from an early Christian martyr through the lives of European and Mexican Christian and Jewish women on to the brutal murder of a Protestant wife-missionary in America's West and finally to Sojourner Truth's God-impassioned struggle for equality. The women's lives are depicted in the context of the historical issues of their times and demonstrate that God's gift of Faith was the driving force for each of them."
– Arleen M. Hynes, O.S.B. Co-author of Biblio/Poetry Therapy—The Interactive Process, who chose Benedictine life after marriage and ten children
Women Included:
Perpetua—early Christian martyr
Catherine of Siena—Italian saint
Katherine von Bora—Martin Luther's wife
Gracia Mendes—Jewish philanthropist
Teresa of Avila—Spanish saint
Anne Hutchinson—Puritan dissenter
Juana Ines de la Cruz—Mexican poet
Kateri Tekakwitha—Mohawk holy woman
Susanna Wesley—mother of Methodism
Ann Lee—founder of the Shaker movement
Narcissa Whitman—American missionary
Sojourner Truth—slave, itinerant preacher
Add to Cart