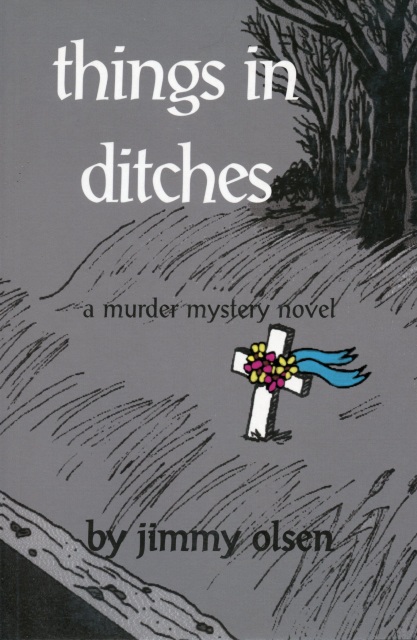 Reviews:
"His name may be Jimmy Olsen, but he writes like Superman. My definition of a great book is simple. It's a book that I can't put down. A book I carry from room to room, and from home to car to work, just waiting for another chance to sneak in a few more pages. A book so engaging that all you want to do is read it. Olsen's novel, Things in Ditches: A Murder Mystery Novel, is terrific."
– John Molene, Saint Cloud Daily Times
"Olsen's story of bloody compulsion and shame is so sickeningly real, I have to look twice to see that his characters aren't on my locked ward."
– Dr. Scott A. TenNapel, noted Minnesota psychologist
"Jimmy Olsen's Things in Ditches is a crackerjack thriller. By taking the murder out of the traditional murder-mystery, Olsen takes us on a new kind of thrill ride with a cast of characters—including an overblown county sheriff, a bumbling town cop hoping to break the hamlet's first-ever murder, and the gentlest killer you'd ever want to meet—that is as true as a rifle shot. Along the way, Olsen turns his frigid Minnesota into a wild place where you can feel the frostbite on every trigger finger and the hot blood melting the blinding white snow. A stellar first novel."
– Gersh Kuntzman, New York Post
Add to Cart
Proudly powered by Weebly