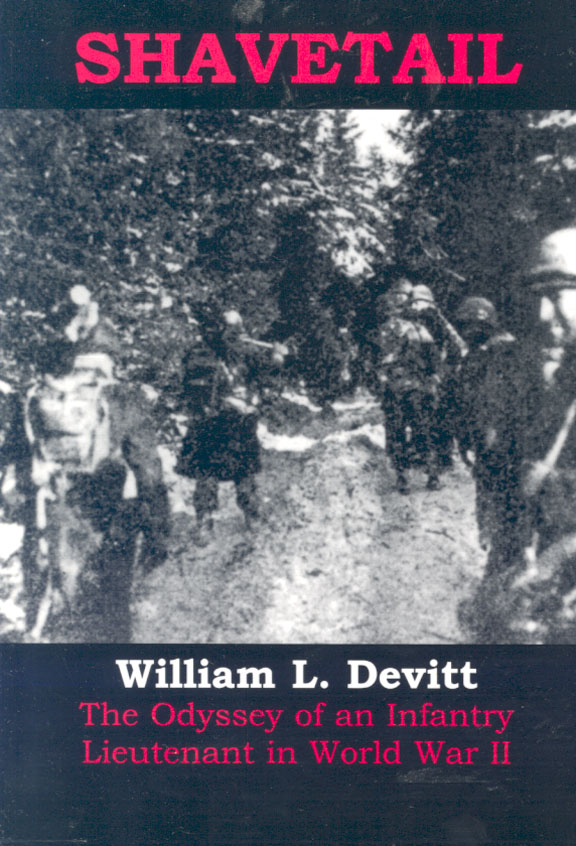 Shavetail: The Odyssey of an Infantry Lieutenant in World War II

Reviews:
"You've got a winner! Vivid, clear, riveting—the story is immediately engaging. . . . The story's point of view, that of a 'shavetail' lieutenant, is the most powerful element of the narrative . . . I think that one who reads it could not easily forget it. . . . It brought me to tears. . . . Shavetail reminds me of All Quiet on the Western Front, A Bell for Adono, but most of all, The Red Badge of Courage, all works that I have taught."
– Patricia G. Bard, Ed.D., English teacher at Walnut Hills High School, Cincinnati, Ohio

"One word describes William L. Devitt's Shavetail—Honesty! From the classrooms at St. Thomas Military Academy to the bloody World War II battlefields of the Hurtgen Forest, Devitt provides a compelling account of not only gallantry, but of the trials and tribulations of the common soldier. Devitt . . . weaves his narrative so well that he carries the reader along with him through the battles, and he is not afraid to discuss his fears and reveal blunders he made during the military campaign. This is not a book about famous generals but a look at what the American soldier experienced during the war. I could not put Shavetail down and . . . craved more when it was finished. This is the real war without the glitter and glory. . . ."
– John J. Koblas, author of Jesse James: Confessions of the Ninth Man and many others
"We must receive for review about 30 biographies a year from soldiers who fought in a particular campaign or war. Most are the everyday remembrances of someone with a story to tell or an axe to grind. A few actually add to the history of the profession of arms, and one such is Shavetail: The Odyssey of an Infantry Lieutenant in World War II by William L. Devitt. From the title one immediately understands this is about Bill Devitt's experiences in World War II, but the book is so much more. It is a brutally honest recounting of what war is all about. From his criticism of the decisions made by senior leaders to insights into his own perceived weaknesses and misgivings, Devitt tells a tale that all who have experienced combat or the fear of battle can empathize with. This is no old soldier's tale, but a reflection by a true "shavetail" on his experiences in the profession of arms. It is an excellent book for anyone with an interest in the history of the military profession or World War II, and especially for cadets or young officers."
– "Editor's Shelf," Parameters: U.S. Army War College Quarterly, August 2003
Add to Cart
Proudly powered by Weebly