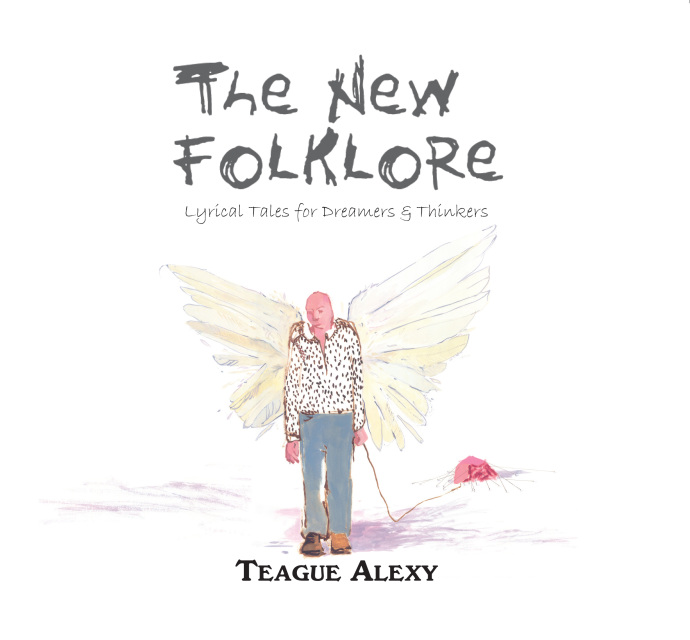 Description: The New Folklore: Lyrical Tales for Dreamers & Thinkers is a collection of seven stories written by musician Teague Alexy and beautifully illustrated by artists from across the country: "The Wisdom of King Joe Colli," "Old Lady Truth," "The New Tune of Elijah Swoon," "Three Little Fish," "How Lefty Stepanovich Turned Water Into Wine," "Teufelo's Tongue" and "Old Rickety Bridge." Alexy's modern folktales are told in the tradition of being nonsensical on the surface with strong underlying truths. Filled with humor, lively characters, clever rhyme schemes and wordplay, The New Folklore provides entertainment and deep insight for young and old. Information on musical versions of these stories performed by Teague Alexy & The Feelin Band (featuring Nicholas David) and information on Teague's band Hobo Nephews of Uncle Frank is available at teaguealexy.com.

For a limited time, receive a free CD of the audio versions when you order The New Folklore!

About the Author: Teague Alexy is an award-winning singer, songwriter and musician living in Minnesota. He has released three albums: The New Folklore, This Dance and A Gentleman Named Actionslave. In 2005, Teague and his brother Ian formed the American roots music band Hobo Nephews of Uncle Frank. Hobo Nephews tour the United States from coast to coast and have released five albums: Hobo Nephews of Uncle Frank, Sing!, Traveling Show, Number One Contender and American Shuffle. For more information, please visit www.teaguealexy.com.

About the Illustrators:
Sally Flanagan is an illustrator and photographer. She trained at the Fleisher Art Memorial in Philadelphia, holds a degree from the Art Institute of Philadelphia and  received her Bachelor of Arts from the University of Pennsylvania. Sally currently resides on the South Jersey Coast.

Chris Monroe is an author, illustrator and cartoonist living in Duluth, Minnesota. She is a graduate of the Minneapolis College of Art and Design. Chris is the author and illustrator of award-winning picture books Sneaky Sheep, Cookie The Walker, Bug On A Bike and the Monkey With A Tool Belt series. Her books have been translated into five languages.She is also the creator of the comic strip Violet Days, celebrating its nineteenth year in print.

Jeredt Runions is a painter, illustrator and craft beer brewer living in Wisconsin. He has a Bachelor of Fine Arts in studio art and geography from the University of Wisconsin – Superior.

Nicholas David is a singer, songwriter, vocalist, musician, voice-over actor and illustrator living in St. Paul, Minnesota. Nicholas had memorable performances on the 2012 season of NBC's The Voice and his 2013 EP Say Goodbye reached #2 on the iTunes album chart. As leader of The Feelin Band, Nicholas plays piano and sings alongside Teague Alexy on the album version of The New Folklore. Nicholas also reads the part of Mr. Borkinszankersneer on the audio version of “How Lefty Stepanovich Turned Water Into Wine.” For more information, please visit www.thefeelin.com.

Christine DeRosa is an illustrator and mother of three living on the South Jersey Coast.