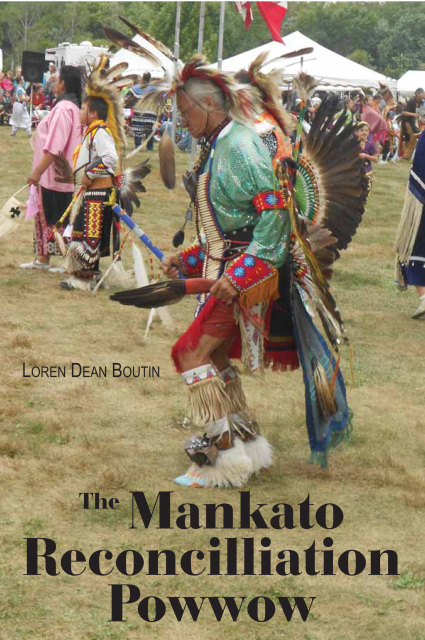 SKU:
$19.95
$19.95
Unavailable
per item
Author: Loren Dean Boutin
Reviews:
Vernell Wabasha read the manuscript of this book and commented on it. She said that, in her opinion, the book should be helpful for people to learn about the suffering that resulted from the 1862 War and the efforts that have been made through the powwow to make peace.

“This story had to be told, not only in terms of describing the principals involved (both the Dakota and those from the community) who committed to reconciliation forty years ago and sustained that effort.”
– Ed Red Owl and Michael Selvage, Sisseton, South Dakota

“The author made an exceptional effort to gather accurate information for this special book. This book clearly shows that this powwow has been a wonderful catalyst for ongoing reconciliation. It was important that someone would write this history.”
– Bud Lawrence, one of the original founders of the powwow

“This book gives a detailed and accurate description of how the Mankato Powwow began and what it is. It will be a good addition to anyone’s library and should be read by American Indians and non-Indians alike. It could be used in local schools as a text on local history.“
– Jim Buckley, one of the original founders of the powwow

About the Author: Loren Dean Boutin took up writing in his retirement after a forty-year career as a psychologist. This book follows two other published books: Cut Nose, based upon historical facts and describing the 1862 War with the Dakota Indians (and its aftermath), and While God Was Hidden, which details major parts of the author’s life and his spiritual evolution from an abused Catholic altar boy to being a dyed-in-the-wool skeptic for several decades to finally acquiring a strong belief in Native American spirituality. Aside from writing, Dr. Boutin enjoys the company of his wife of nearly four decades, her fine cooking, a favorite cat, a large and growing extended family, many good friends, and a wide variety of activities including boating, fishing, other lakeside activities, gardening, traveling, and, overall, a very comfortable life in St. Peter, Minnesota.
Add to Cart