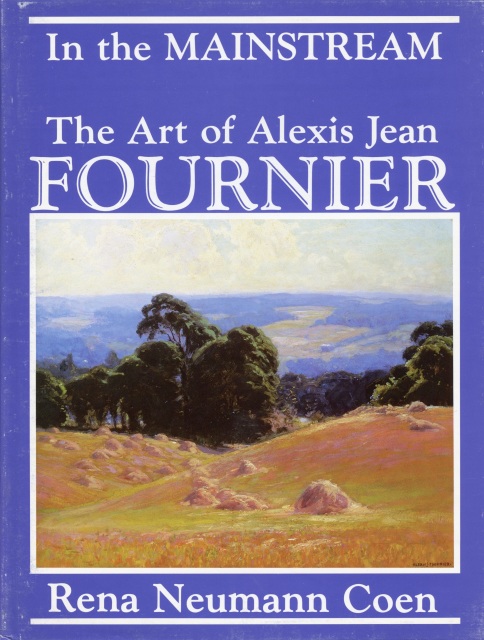 Description:
Alexis Jean Fournier was an important American painter whose work was in and of of the mainstream of the late 19th century and early 20th century. His early work carried on in the tradition of the American landscape painters.
Fournier's period of study and work in France came during the years which saw the end of the Barbizon period and the development of Impressionism. This insight into the two styles allowed him to express his painterly talent and vision within a uniquely American idiom—the romantic landscape. The lush rural areas of the Midwest and Great Lakes region provided the rich, sunlit landscapes which recalled for him the Barbizon region of France.
Alexis Jean Fournier was a working painter. He worked very hard at his easel but again as hard in the exhibition and sales of his work. Fournier kept a lively contact with the American arts and crafts movement especially through Elbert Hubbard's Roycroft colony.
It is only recently that the renewal of interest in representational art has brought Alexis Jean Fournier, a forgotten master, to a new generation of Americans who recognize him as one of America's visual poets.

Reviews:
"Alexis Fournier was an artist whose tremendous diversity was uniquely accompanied by a steady display of superior artistic ability throughout his long career—whether as a Realist in depicting the urban world of Minneapolis, as a Tonalist interpreter of Nature's haunting moods both in the forests of Barbizon in France and in the scenery around Buffalo and East Aurora, New York, and finally as a brilliant interpreter of the blazingly sunlit and colorful autumnal landscapes painted in the art colony of Brown County, Indiana. Dr. Rena Coen has pursued this peripatetic, heretofore neglected genius down the paths of his travels and to his changing stations of operation, and has produced a study which is both scholarly and engaging, and which should elevate Fournier to his rightful place as one of the finest American landscapists of his time."
– William H. Gerdts

". . . Coen's biography is generously highlighted with newly found historical facts which bring aspects of the Barbizon and Impressionist traditions into clearer focus, while Alexis Jean Fournier is rediscovered as an American master painter."
– Patricia Jobe Pierce
". . . The book is readable and long overdue. Fournier was obviously a personable gentleman as well as an excellent painter, and the time is ripe for his reputation to be re-established. This book should go a long way toward doing that."
– Robert C. Vose, Jr.
About the author:
Dr. Rena Coen is a professor of art history at St. Cloud State University. In addition to the present volume, In the Mainstream: The Art of Alexis Jean Fournier (1865–1948), Dr. Coen has written Painting and Sculpture in Minnesota 1820–1914 for the University of Minnesota Press. She has written six children's books.
Rena Coen has enjoyed many professional associations in addition to teaching. After her studies at Barnard College, Yale and the University of Minnesota she has kept apace of the art world as a consultant, founding member of the Association of Historians of American Art, reviewer and active member of the AAUP.
Dr. Coen has authored numerous articles in American Art Journal, Minnesota History, Art History and other journals.
Add to Cart