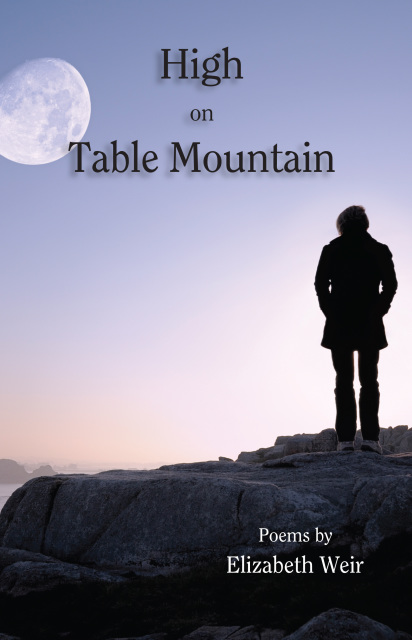 Blurbs:
“This is a wonderful book. Weir makes the voyage each of us takes on different routes but under the same moon. She seeks, from South Africa to a great white pine in Minnesota, ‘. . . the lost path home’ via memory and soul. Like a house, this book lives among ‘. . . the large and the small, the worldly/ and the innocent,’ in rooms where ‘. . . clocks gather in hours,’ a ‘. . . dishwasher pump(s) its wet music,’ a wooden spoon’s ‘busy hips’ can dance among onions, and a family’s poignant scars remain ‘. . . embedded sharp barbs.’ In perfect descriptions and lines Weir expresses a deep and tender love for her voyage.”
– Sharon Chmielarz, author, Visibility: Ten Miles

“In poem after searching poem, Weir looks at the world through words, and the world looks back.”
– Dore Kiesselbach, author, Salt Pier

“In High on Table Mountain, by Elizabeth Weir, we enter a book of poetry that moves effortlessly between nature and art, sand sharks and Milton, the stars in the southern sky and early memories of childhood in England, including the stunning poem ‘Lamb,’ portraits of parents, and her life in the United States. Elizabeth Weir is a poet whose words evoke worlds, a sensuous writer who describes landscapes, seasons, visions of food and drink, old traditions and new ways to live. In these poems, as the poet writes, there is often ‘the ache of doubleness in our bones’ as the family settles into new rhythms in their new country. Weir's collection works beautifully in the truthful human territories of beauty, memory, deep sorrow, and in its acknowledgement of loneliness and kinds of distance, both geographical and personal.”
– Deborah Keenan, author, From Tiger to Prayer

About the Author: Elizabeth Weir grew up in England and worked as an RN in South Africa before coming to live in Minnesota with her husband and two young sons. While raising the boys, she dipped into travel writing, weekly news reporting and arts reviewing; she also had a weekly column. Theatre is important to her. She received scholarships from the Star Tribune and New York Times to attend the Critics Institute in Connecticut as the reviewer of Twin Cities theatre for Talkin’ broadway.com. More recently, she served on her city’s planning commission and city council for seventeen years and became mayor, retiring at the end of 2014. In high school in England, she loved the wonder she found in poems but, in the rush of daily living, she lost poetry. She is grateful to poet Chet Corey of Normandale College, who reopened that closed door for her. The poems she most enjoy are windows where the mind acknowledges the pane but sees the world beyond.