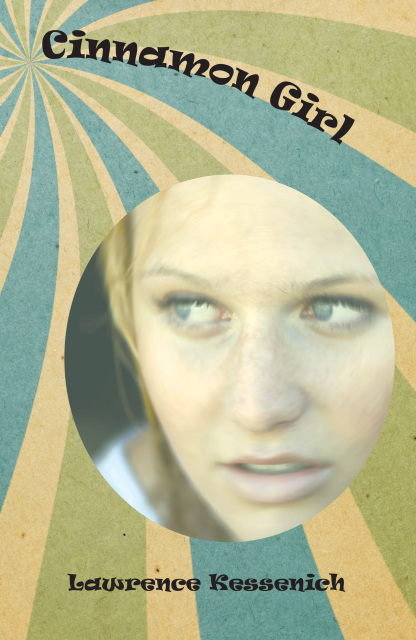 Blurbs:
“Cinnamon Girl, poet and playwright Lawrence Kessenich's first novel, recreates the dreamscape of the late 1960s in subtle, successful tones. John Meyer is working his way through college, navigating the shoals of a conservative family, radical student politics and a complicated love affair with all the aplomb you might expect from a nineteen-year-old.
“Kessenich remembers the trials of being young; Try this, or not? Believe this, or accept the status quo? Risk a forbidden emotion, or remain cocooned in a world that may well cease to exist before you turn twenty? There is excellent art in this story of a Milwaukee boy tuned in to the societal television show of student violence, experimental drug use, and the changing moral code and wondering: How does all this apply to me?
“Low-key and insightful, Cinnamon Girl is a lovely tale of youth's travails, told by an artist still in touch with those turbulent feelings and times.”
– Alex Beam, Boston Globe columnist and author of The Feud: Vladimir Nabokov, Edmund Wilson, and the End of a Beautiful Friendship

“In this haunting, perfectly observed debut, poet extraordinaire Kessenich shows that he’s a skilled novelist as well. Whether you’re of the Vietnam era or not, Cinnamon Girl will remain seared in your memory.”
– Steve Ulfelder, Edgar Finalist author of Purgatory Chasm

“Milwaukee, 1969—student protests, draft deferments, family dissension, free love . . . Lawrence Kessenich, a novelist with keen muscle memory, takes us on a spirited journey to a time and place in some ways as distant as ancient Rome and registers the first tectonic shifts that have left us a divided nation today.”
– David Payne, award-winning novelist and author of Barefoot to Avalon
​
Description:
It’s 1969, the summer of Woodstock. After nearly getting his head bashed in a demonstration on Milwaukee’s East Side, John Meyer crashes down a hillside with fellow student Tony Russo. It looks like the beginning of a beautiful friendship. Then John meets Tony’s wife, Claire, and their young son, Jonah, and things get complicated, especially when they and another student rent a house together. Meanwhile, John is at odds with his parents and with a society that supports the war in Vietnam.

Then comes a national student strike and the shooting deaths of four students at Kent State. Over Claire’s protests, John becomes involved in the strike in Milwaukee. Tony’s brother being wounded in Vietnam brings the war right into their crowded, complicated living room. Can John, Claire, Tony, and baby Jonah forge a new kind of family for a new age, or will the weight of the world pull them all down?

About the Author: Lawrence Kessenich is a fiction writer, poet, playwright, essayist, reviewer, and editor. He has published a number of short stories and won the 2010 Strokestown International Poetry Prize. He has three books of poetry: Strange News, Before Whose Glory, and Age of Wonders. He has also published essays, one of which was featured on NPR’s This I Believe, and appears in the anthology This I Believe: On Love. His short plays have been produced in New York, Boston, and Colorado, where he won the People’s Choice Award in a national drama competition. Kessenich is the co-managing editor of Ibbbetson Street literary magazine. Cinnamon Girl is his first novel.