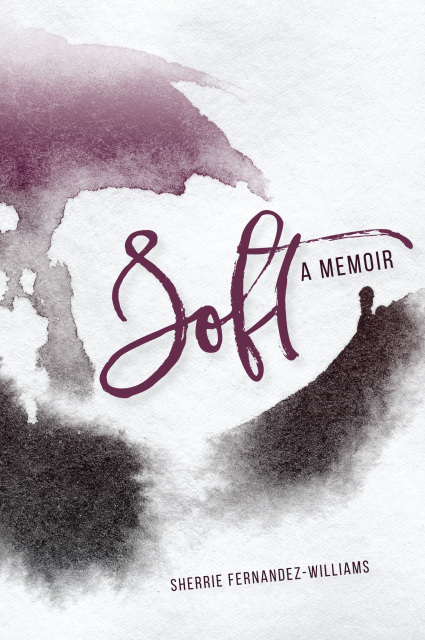 “Soft, Sherrie Fernandez-William’s first book, is a relentlessly textured memoir exposing the author’s life as she goes back and forth in time, examining who she is today, and why. Soft is a story for those who understand moving from one ­geographical, spiritual, or identity-oriented place to another, hoping to escape, only to discover there are always other places that need escaping. It is a story for those searching their own lives to understand the capacity we may have to move forward, even as we may be forced to move back, with strength, and dignity and compassion, and despite our fears.”
~Sherry Quan Lee, author of Chinese Blackbird, How to Write a Suicide Note, and Love Imagined

“An African proverb says, ‘When spider webs unite, they can tie up a lion.’ In Soft, Sherrie Fernandez-Williams weaves the threads of her life; from her childhood in the Farragut Housing Project in Brooklyn to her move to St. Paul, where she manages to survive a tumultuous marriage, through adopting and raising a set of twins, to her achieving an MFA degree and a fulfilling career and finding love with another woman. In finding, claiming and owning her own power, ­Fernandez-Williams not only ties up a lion, she becomes a lioness. Her story breaks down multiple stereotypes.”
~Carolyn Holbrook, author of Ordinary People, Extraordinary Journeys

“Sherrie Fernandez-Williams is a new voice in memoir that you’ll want to know: accomplished, unblinking, right there, telling truth. Soft is about coming up through poverty and silence and getting ‘grown,’ about writing as an act of faith, adoption and the shock of motherhood, terror and the hard, true path of love. A bracing, tender story that rings with joy. Turns out that crazy optimism and the disappointment it reaps can actually bloom, and ‘life could be as spectacular as a light show of celestial bodies.’”
~Patricia Weaver Francisco, author of Telling

“Sherrie Fernandez-Williams writes luscious, sensate, tumultuous prose. Immerse yourself in her soft yet unflinching sentences, as well as the ever-changing body of her journey, and you are sure to come away changed.”
~Barrie Jean Borich, author of Body Geographic

About the Author: Sherrie Fernandez-Williams is the author of Soft. She holds an MFA in Writing from Hamline University in Saint Paul, Minnesota, and is the recipient of an Artist Initiative Award through the Minnesota State Arts Board as well as a SASE/Jerome Grant through Intermedia Arts of Minneapolis. She was a Loft Mentor Series winner for Creative Nonfiction, selected for a Givens Black Writers Collaborative Retreat, and received a Jones Commission Award for new playwrights through the Playwrights’ Center of Minneapolis. Excerpts of her memoir have been published in several literary journals and anthologies. Fernandez-Williams discovered her need for words in Brooklyn, New York, where she was born and raised, but she “grew up” as a writer in Twin Cities. She resides and teaches in Saint Paul, Minnesota.